Henry and Susan Samueli are proud to call Orange County home, and the Anaheim and Orange County community is the focus of their philanthropic investments.

Since purchasing the Anaheim Ducks in 2005, Henry & Susan Samueli have been committed to developing a quality hockey club in relentless pursuit of its next Stanley Cup, while also equally committed to creating positive change for children and families in Anaheim and Southern California.

Over their tenure, the Samuelis have committed more than $500+ million in philanthropic financial support to the local Orange County community.

Now with the launch of ocV!BE, the Samuelis seek to expand this commitment and assist Anaheim in new and profound ways, including through support of the Anaheim Community Foundation and the Anaheim Hive. Their goal is to help build out and support Anaheim’s social and nonprofit communities, assisting in developing a “community identity” around this project.

Read below to learn more about a few highlights of our community impact and initiatives: 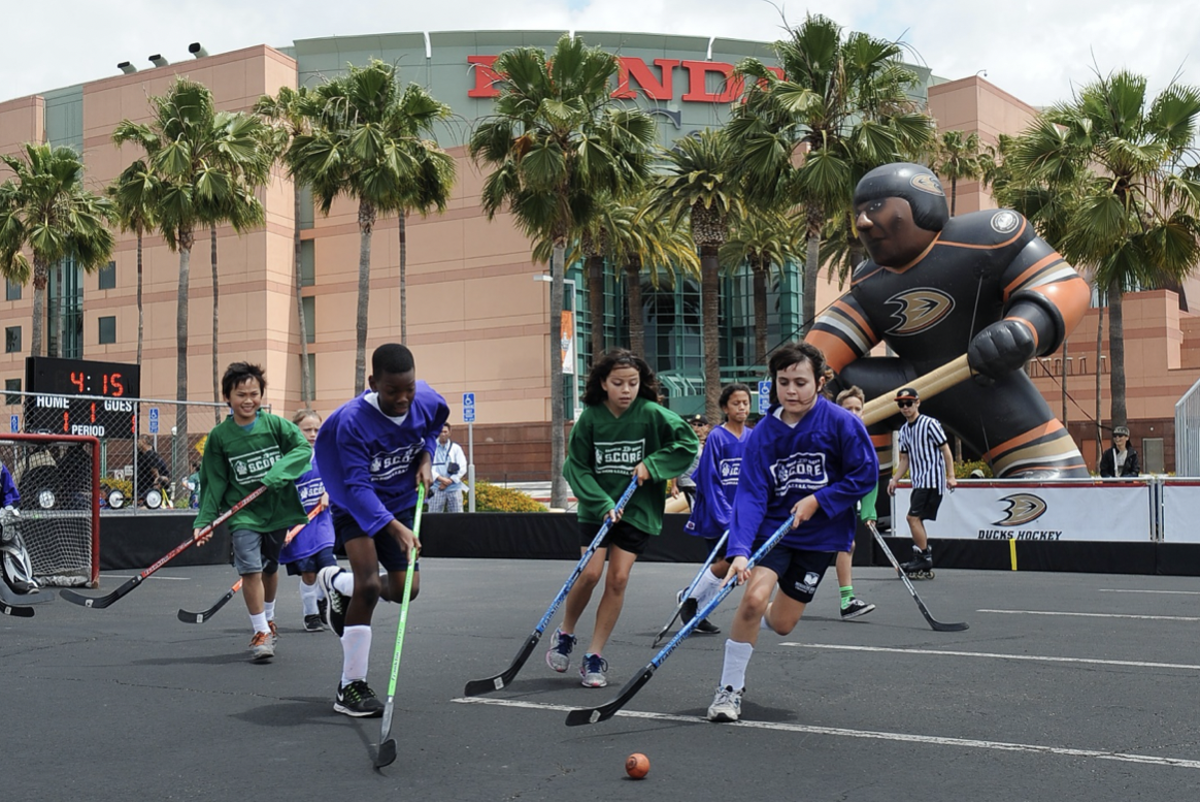 Building upon the Walt Disney Company’s commitment to youth, since 2005, the Samuelis have supported Growth Opportunities through Athletics, Learning and Service (GOALS), a nonprofit dedicated to serving disadvantaged children in Anaheim with youth development programs in athletics, learning enrichment, and community service.

In December 2019, the Samuelis and Anaheim Ducks completed construction a street hockey rink at the GOALS ABC Clubhouse in the underserved area of West Anaheim to provide hundreds of neighborhood youth with the opportunity to learn and play hockey in a safe, local location. 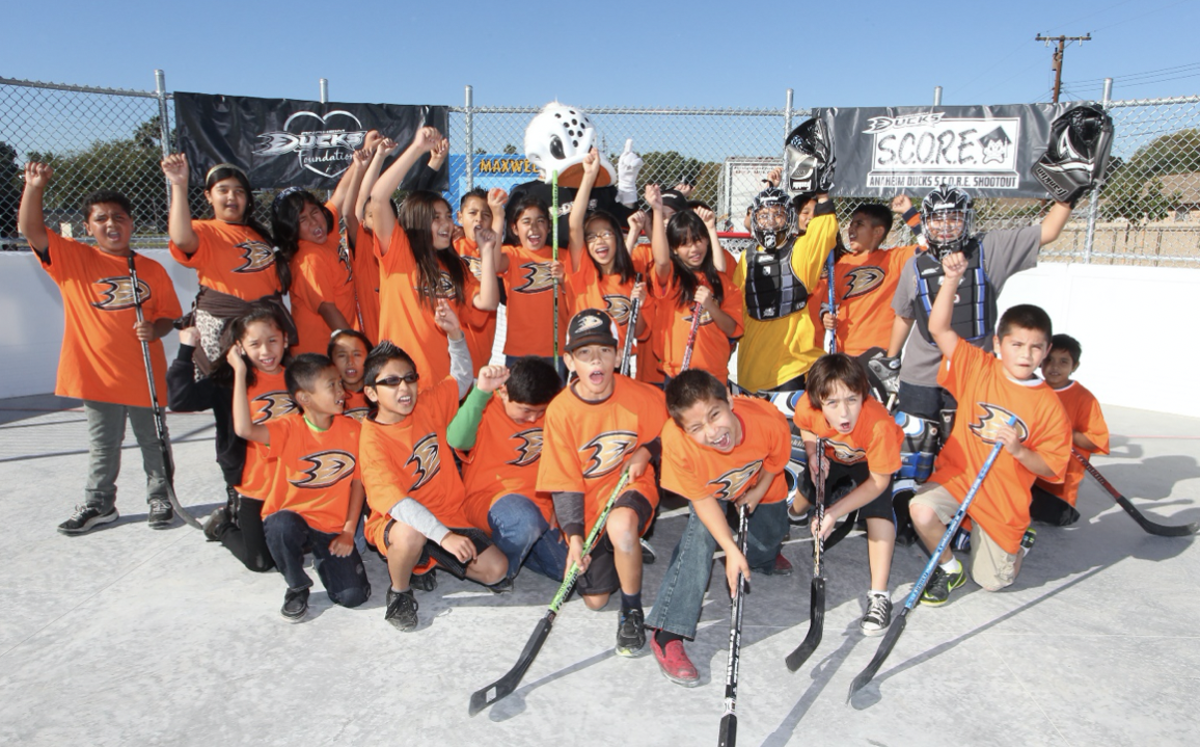 Founded in 2008, the Anaheim Ducks Foundation seeks to facilitate and support programs that produce positive change for children and families throughout Southern California by providing education opportunities, broadening access to the sport of hockey and addressing the health and wellness needs of our community.

The Anaheim Ducks Foundation facilitates programs such as S.C.O.R.E. and Learn to Play, which seek to educate youth and expand the sport of hockey in Anaheim and the broader Orange County community. Launched in 2009, Anaheim Ducks Learn to Play powered by Ryan Getzlaf provides four weeks of hockey instruction at no cost to the player. In addition, youth who graduate from the program are eligible to receive their first set of hockey gear for free through the Foundation’s equipment program.

Another program of the Anaheim Ducks Foundation is the annual Power PLAY! day of service. Launched in 2012, Power PLAY! brings the Ducks community together to beautify and upgrade one lucky school in Orange County and build a brand-new street hockey rink. Mattie Lou Maxwell Elementary, located in West Anaheim, was the inaugural school for the volunteer event and received a new rink, murals, trees and a garden. The Ducks have a more than decade long partnership with Maxwell, with programs such as Reading is the Goal, which promotes literacy by rewarding students with Ducks prizes for the number of minutes spent reading.

For 15+ years, Honda Center has co-hosted the annual We Give Thanks meal on Thanksgiving. This event led by local restauranteur Frank Garcia of La Casa Garcia Restaurant and his nonprofit has served over 230,000 meals in its 33 year history to provide Orange County locals with a hot Thanksgiving meals who may have got without on the holiday.

Across Southern California, including in Anaheim with Anaheim ICE, the Samuelis have created a network of skating facilities throughout the region to offer a variety of hockey and skating programs for community participants of all ages and ability levels.

The Rinks, along with Great Park Ice and FivePoint Arena, are home to thousands of youth and adult hockey players as well as recreational skaters to competitive Olympic figure skaters.

Founded in 2008, the Anaheim Ducks High School Hockey League has grown from one team to 51 teams in 2019-20 and showcases talent at all levels. In total, the Anaheim Ducks have provided more than $2.5 million to support high schools in the league, which has celebrated three USA Hockey national championships and its first NHL draft pick in 2018.

In response to growing awareness around at-risk youth in Anaheim, the Anaheim Ducks partnered with the Disneyland Resort and Angels Baseball to take action. In 2013, with the support of the Orange County Community Foundation, the Accelerate Change Together (ACT) Anaheim initiative was born.

ACT Anaheim has provided more than $6.8 million to 14 nonprofits over five years, impacting 20,000 youth. These youth are more college- and career-ready, more engaged with their community and are supported by their parents and mentors. The Ducks partnership has allowed ACT Anaheim nonprofit organizations to expand their impact—transforming a gang-controlled park into a safe space, connecting youth to workplace mentors and coordinating thousands of community service hours. 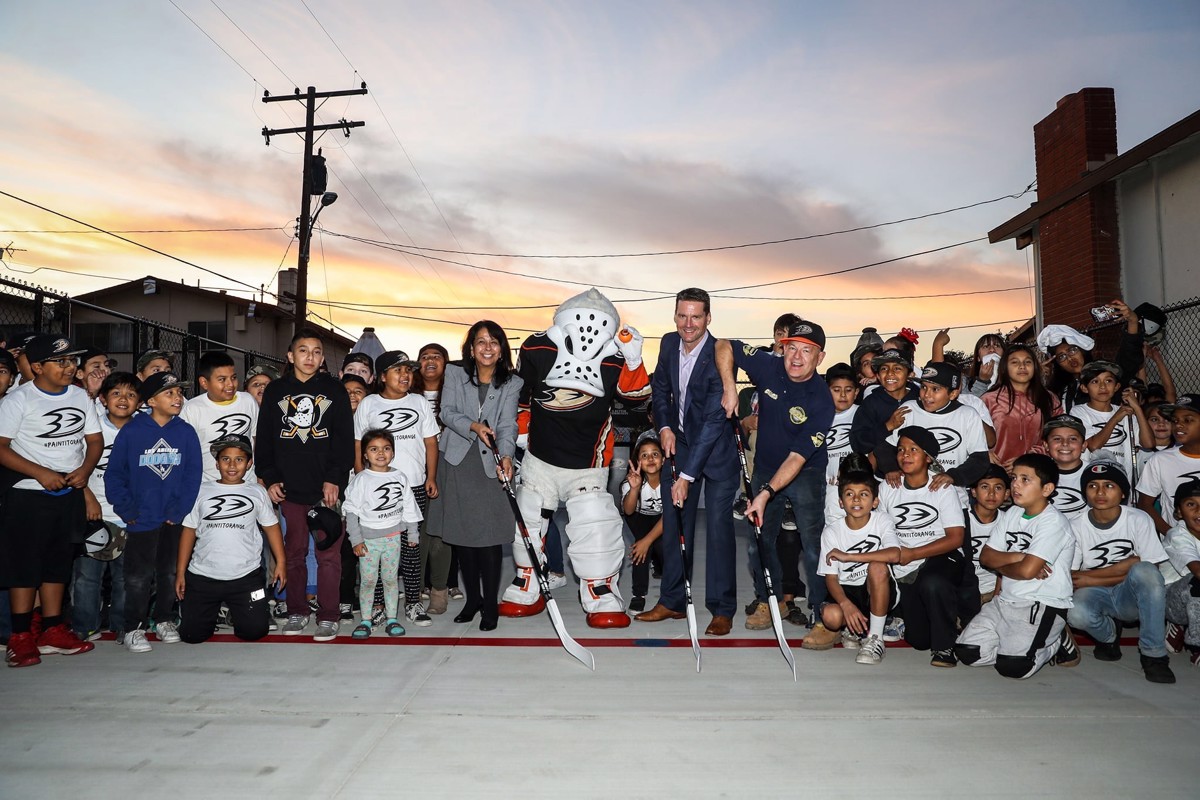 Moving forward, the Samuelis are committed to ensuring the success of the Anaheim Community Foundation. Specifically, the Anaheim Community Foundation, in partnership with the Samueli Foundation, is helping to build the capacity of nonprofits serving Anaheim. “The Anaheim Hive: Where Nonprofits Thrive” is a no-cost, shared, incubator space for community-based organizations to meet, work, and collaborate. Beyond physical space, The Anaheim Hive will also promote opportunities for trainings and resources that benefit the work of nonprofit organizations who serve Anaheim.

The Samueli Foundation, in partnership with Anaheim Community Foundation, also recently launched a new grant fund, Anaheim Community Impact Grant (ACIG), a cross sector collaboration dedicated to meeting the needs of Anaheim residents through existing community resources. The purpose of this fund is to bolster and enhance the efforts of the City of Anaheim by addressing the needs of the community by providing services for residents in Anaheim; and to build the capacity of the nonprofit sector by engaging in conversations and collaborations among cross sector entities. The most recent round of funding supported Anaheim-serving nonprofits operational needs in the wake of COVID-19 impacts.