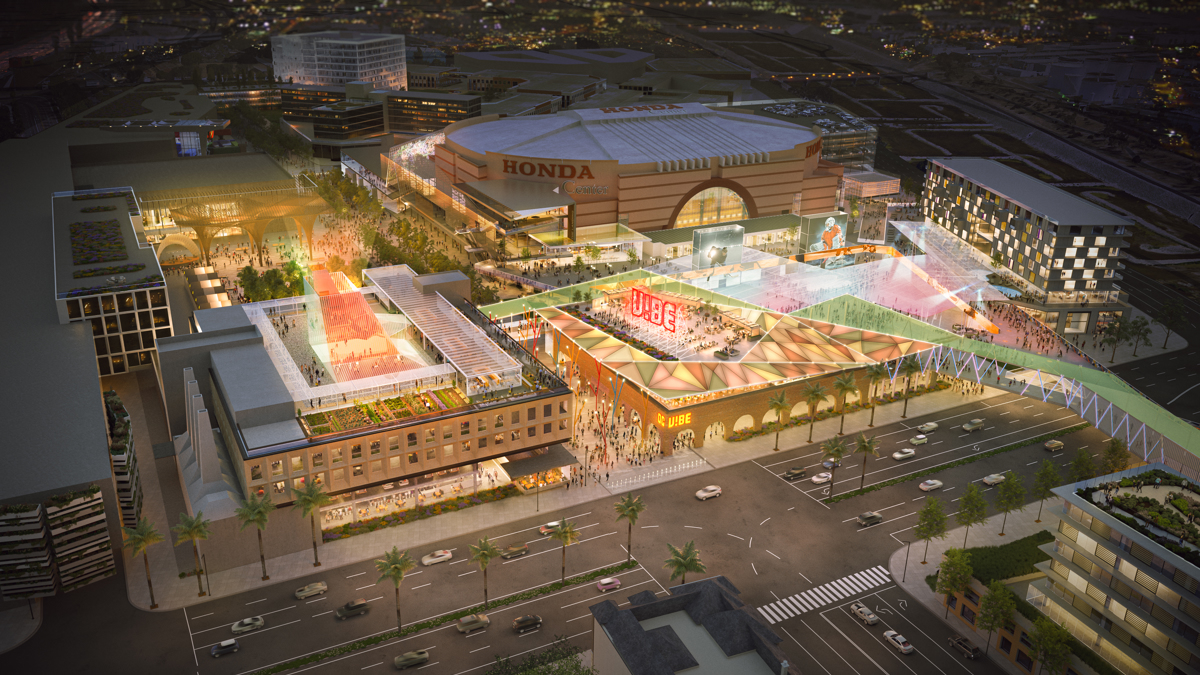 ocV!BE, a $3 billion, 115-acre, mixed-use community and live entertainment district, is coming to Anaheim. An endeavor of the Samueli Family (owners of the Ducks), this sustainable and transit-oriented district is scheduled to open in 2024 and be fully completed by the 2028 Olympics when Honda Center hosts indoor volleyball.

ocV!BE will surround its anchor, Honda Center, the home of the Anaheim Ducks, with a full range of lifestyle and public amenities as well as live entertainment venues. This includes a new 6,000-capacity concert venue, a 68,000-square-foot food hall, a variety of restaurants and retail, two new hotels with 650 total rooms, a 325,000-square-foot office tower, three unique public plazas surrounding the Honda Center, 2,800 residential apartment units that will include a 15% dedication to affordable housing, 30 acres of open space and parks, and a network of pedestrian bridges and walkways, including a landmark bridge over Katella Avenue.

The proposed development will create nearly 13,000 construction jobs, 3,300 permanent jobs upon completion, and generate more than $2 billion in a one-time economic impact, according to an analysis conducted by the public finance and development economics firm, DTA. The project also will generate over $400 million in annual recurring economic impact. Revenue generated by the project will assist the City of Anaheim in its efforts to recover from the COVID-19 pandemic as well as enhance neighborhoods and public safety.

“ocV!BE will provide a live, work, and play community of a scale not seen in Orange County, with live entertainment events and activities year-round,” said Tim Ryan, CEO of newly created ocV!BE Sports & Entertainment, LLC, which will manage the development and operation of the district. Michael Schulman, Managing Director of the Samueli Family office, will serve as Executive Chairman of ocV!BE Sports & Entertainment.

A 2018 agreement between the City of Anaheim and Anaheim Ducks ownership, extending the team’s commitment to Anaheim for up to an additional 50 years, paved the way for a series of private acquisitions by ownership, leading to control of 115-acres surrounding Honda Center.

“The Master Plan of this 115-acre district will create a livable, balanced community that has long been envisioned for the Anaheim Platinum Triangle,” said Dan Young, lead master planner for the project. “ocV!BE will also link the district to the region’s broader assets including Angel Stadium and the Platinum Triangle, the growing Anaheim Resort District, and the largest Convention Center on the West Coast.”

ocV!BE will feature three unique public plazas surrounding Honda Center. The urban park plaza to the west, more than three acres in size, will be anchored by a new 6,000-capacity concert venue, a 68,000-square-foot food hall and a landscaped boulevard, the Paseo, featuring retail and dining opportunities. The southern-facing plaza will be a hub of activity focused on sports with elevated walkways providing ample opportunities for dining. The northern plaza will feature a collection of smaller club-style venues. In addition, ocV!BE features 20 acres of urban parks, including a 5-acre riverfront park providing ample space for community gatherings and special concerts and events.

ocV!BE’s Master Plan proposes more than 2,800 residential apartments, filling a critical need for housing in Orange County, and includes a commitment of 15% affordable housing units onsite. These residential communities will have full access to the entertainment and lifestyle amenities including 30 acres of open space and more than 3 miles of trails.

In addition, a new 325,000-square-foot office tower will attract top employers to Anaheim. When combined with other new and existing office buildings, the office campus will be over 825,000-square-feet and in close proximity to all of the district’s offerings. ocV!BE will also feature two new hotels with 650 total rooms, providing a unique hospitality choice in the Anaheim marketplace focused on lifestyle and entertainment for tourists and conventioneers.

“ocV!BE will transform Anaheim as a destination location. This exciting project will assist Anaheim in enticing and retaining guests, particularly conventioneers, to dine, shop, stay and be entertained in Anaheim, generating significant revenue for the local hospitality industry and the City of Anaheim,” stated Jay Burress, CEO of Visit Anaheim.

ocV!BE embraces a transit-oriented community. The Master Plan integrates the existing transit center, known as ARTIC, into the broader district. By drawing more guests to ARTIC, ocV!BE will in turn increase transit ridership via Amtrak, Metrolink and bus providers serving all of Southern California. Ridesharing will also be thoughtfully designed into the project, with onsite pickup and drop-off areas.

ocV!BE is supported by a series of parking structures and increased road capacity, engineered to improve traffic flow and circulation. Development of a comprehensive traffic management plan is underway to alleviate many of the current circulation issues and accommodate the new uses. The proposed Master Plan will generate significantly fewer vehicle trips than what was previously studied and entitled for this project site.

“We are proud to present ocV!BE, the exciting next chapter for Honda Center and the surrounding area. We are fully committed to Anaheim, and we believe this sustainable and integrated community will offer a unique and attractive lifestyle as well as create jobs, while also providing residents and visitors additional opportunities for premier live entertainment to complement our marquee Honda Center events,” stated Henry and Susan Samueli. 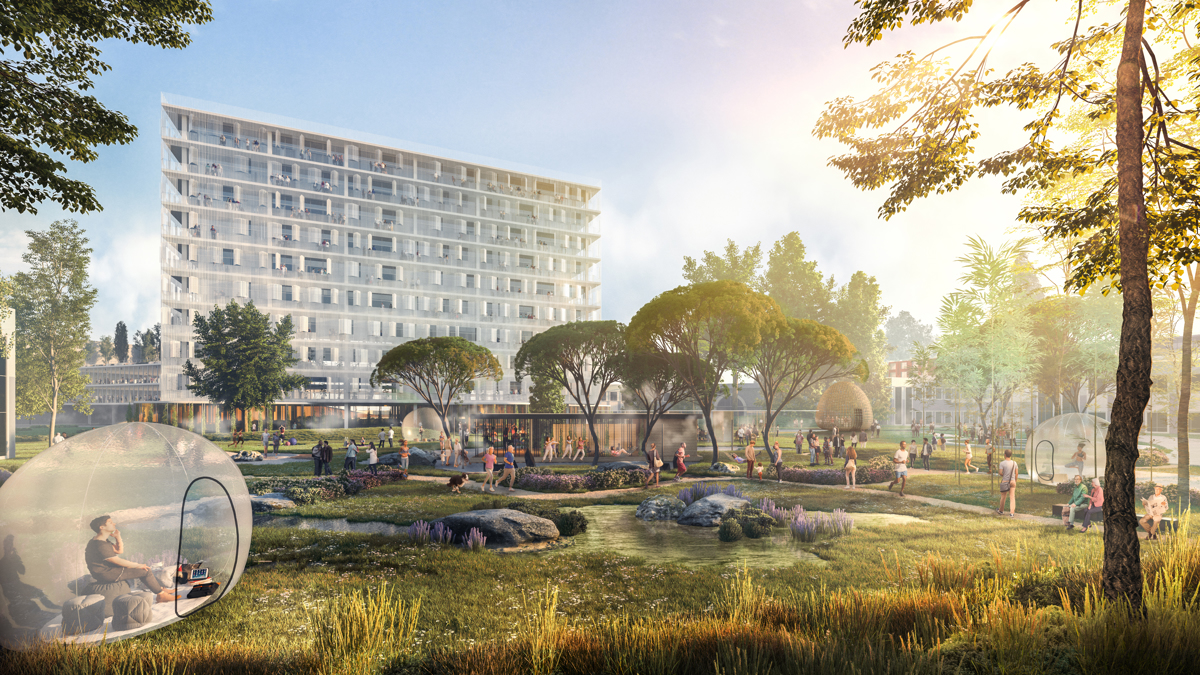 “We are thrilled to announce such a creative and experienced leadership team to direct this exciting project,” said Ducks Owners Henry and Susan Samueli, who funded and spearheaded the development. “We expect ocV!BE to be an important part of the fabric of Orange County for generations to come.”

Ryan will provide leadership over the development of ocV!BE while maintaining oversight of Honda Center, The Rinks facilities, and affiliated business entities, including the Anaheim Ducks Hockey Club and the San Diego Gulls Hockey Club. He has more than 41 years of arena management and event creation experience, 27 of those years at Honda Center. He most recently served as the President/Chief Executive Officer of Anaheim Arena Management, LLC and the Executive Vice President/Chief Operating Officer for the Anaheim Ducks Hockey Club, LLC. Ryan has recently led significant efforts in renovations and vital improvement projects around Honda Center, including the Grand Terrance Project that features the Shock Top Terrance and Anaheim Ducks Team Store.

Foltz will be responsible for the day-to-day operations and all corporate-wide business functions of ocV!BE, including Finance, Human Resources, Information Technology and Legal. His knowledge and experience spans over a 30-year career in professional sports, hospitality, private equity and consumer products. Foltz was previously the Chief Financial Officer for the Anaheim Ducks, Anaheim Arena Management and H&S Ventures. In his previous role, Foltz was responsible for the financial planning and execution of major projects and initiatives such as Honda Center’s backstage construction project, Great Park Ice and the Grand Terrace Project.

Young is currently leading the master planning of ocV!BE. He spent 16 years with the Irvine Community Development Company, including serving as president from 2007-16. He has also enjoyed a 20-year career in real estate development and consulting, which has included helping lead a recent development campaign focused on housing for the homeless. Young previously served 11 years on the Santa Ana City Council, including spending eight years as mayor.